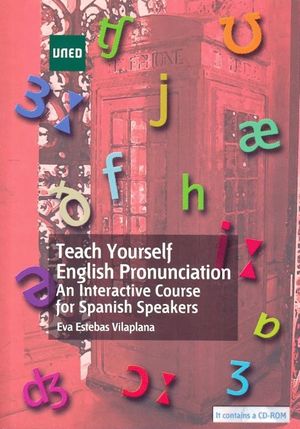 TEACH YOURSELF ENGLISH PRONUNCIATION. AN INTERACTIVE COURSE FOR SPANISH SPEAKERS

This book is aimed at helping Spanish speakers to overcome their communication problems in English by introducing the most relevant issues of English pronunciation and comparing them with those of Spanish pronunciation. It covers not only vowels and consonants but also other aspects such as stress, rhythm, intonation, words in company, combinations of sounds and accent placement. The book is accompanied by a CD-ROM which contains more than 2000 audio entries and interactive ear-training exercises with inmediate feedback. The audio material includes voice recordings of four native English speakers. Eva Estebas Vilaplana obtained her PhD in Phonetics at University College London (UCL) where she taught phonetics and phonology and worked as a research assistant for over six years. She holds one MA in Phonetics (UCL) and one MA in English Philology (Universitat Autónoma de Barcelona-UAB). She has a degree in English Philology (UAB) and another one in Spanish Philology (UAB).